Search the history of over 452 billion web pages on the Internet. 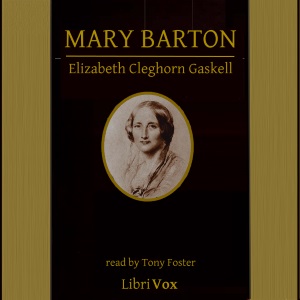 "Mary Barton: A Tale of Manchester Life" was Mrs Gaskell's first full-length novel. It was published anonymously in that tumultuous year of political change, 1848 - only a few months after the Communist Manifesto co-authored by her fellow Manchester-resident, Friedrich Engels. Engels's experience as agent in his father's cotton-spinning factory motivated him to write "The Condition of the Working Class in England", a classic account of the sufferings of the poor under the factory-system.

Elizabeth Gaskell's own personal contact with the plight of the poor cotton workers of Lancashire also compelled her to a compassionate examination of their lives; but as a middle-class woman, married to a Unitarian minister, her approach to her subject took on a more emotionally complex significance; influenced by religious faith but also by more personal considerations.

In the brief preface to the novel, Mrs Gaskell hints at her initial impulse. The loss of a beloved child in infancy led her to seek a therapeutic outlet, but one which left her uncertain of her capacity to contextualize her public, writerly response to the tragedies occurring in the surrounding society of Manchester's poorest classes: "I know nothing of Political Economy, or the theories of trade..." She was, however, determined to portray, in novelistic form, the intimate connection between the private experience of her characters and the social forces of her time. The success of the novel led her to proclaim her authorship and move on to further works of fiction, which have secured her in our times a mounting reputation as one of the leading novelists of the mid-Victorian period.

Certainly the novel features numerous death-scenes, all conveyed with a depth of sympathy that contrasts with the queasy iambics with which Dickens orchestrated the notorious demise of Little Nell. Mrs Gaskell was not, like Dickens, a London-based novelist observing the sufferings of the provincial poor with a journalistic detachment - as evidenced in his own admirable, Lancashire-based novel "Hard Times". Gaskell lived among the people whose attenuated lives she chronicled - and however hesitantly, as a début novelist, she rendered their experience in literary terms, her writing presents us with a true insight into the sufferings of individuals at a point in history when the mass of human beings fell casualty to the forms of economic progress following upon the Industrial Revolution. Most impressively she called into question the political and social cost of creating a resentful proletariat despairing of survival in (to quote Karl Marx) a "heartless world".

Our reader Tony Foster is a resident of Manchester and a near-neighbour of Mrs Gaskell (allowing for their separation in time). His superb narration renders the native speech of her characters with an authenticity which ideally conveys the spirit of this book. A truly moving experience awaits everyone who gives ear to this 'Tale of Manchester Life'. (Summary by Martin Geeson)

I enjoyed the story, too. Heartrending in places, almost comical in others, and really adds flesh to the situation of workers before social security or unemployment insurance.
Reviewer: dahszil - favoritefavoritefavoritefavoritefavorite - December 16, 2018
Subject: Tony Foster is a fine reader and narrator
This is a fine story about individuals, family, community, society and the pressures of the aforementioned by laissez faire capitalism. Also it is a wonderful story about the everyday life again of the aforementioned . Elizabeth Cleghorn Gaskell was of similar interests and compassion for "the unwanted", the poor, the workers, and such like to Charles Dickens . Dickens books and talks did affect the parliament to make some reforms . But it was Prime Minister Gladstone, circa 1880 who was one of those who started the Liberal party which compete with the Whigs and Tories , who really made concrete the first reforms in law for government's responsibility for helping make life more liveable for "the unwanted" etc .

There is much to applaud for personal giving and private organization charity . But only government can make laws for better pay, a humane work week and day, ie the material necessities for a better standard of life of those at the bottom and up to the lower middle class .
Reviewer: morpheus23 - favoritefavoritefavoritefavoritefavorite - November 4, 2016
Subject: Great Book
Thank you so much Tony Foster for bringing this wonderful book to life with your excellent reading. As someone who is new to the works of Elizabeth Gaskell, I feel so fortunate to be introduced by Mr. Foster's rendition. Be assured I intend to look into her other novels. If they are as good as this one,she may replace Charles Dickens as my favorite Victorian author.
Reviewer: vox humana - favoritefavoritefavoritefavoritefavorite - March 31, 2016
Subject: A moving tale
Loved every minute of this. The reader engaged with the characters and put across their sufferings with the sort of empathy not often heard in audio books. A great listen.